Beautiful stone figures - all built by one man.

Last weekend, I arrived at my next station: Gumi, South Korea. Just like at my previous project locations, I will be spending three months here. Gumi has about 370,000 inhabitants and is located somewhere midway between Seoul and Busan. Although it is most well-known for being the “Silicon Valley of Korea” due to the large amount of industrial companies located here, it also features an interesting recreational area very close to the city center: the Geumosan National Park. 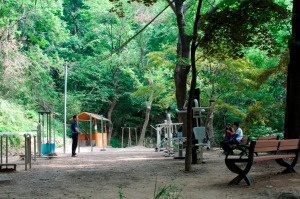 The outdoor gym – which we felt we didn’t need anymore that day.

So on my first weekend here, I joined colleagues from Korea, Germany and China to hike up Mt. Geumo. We met at the hotel where the other Germans and Chinese were staying, as it’s located directly at the entrance to the national park. The main sight of the national park is a waterfall, so it is not only connected to the valley by a cable car, but the path leading up is also very comfortable and consists of mostly paved, only moderately steep paths and wooden stairs. At the upper station of the cable car, there is a large recreational area with restaurants, resting areas and even an outdoor gym, as well as a Buddhist temple. We took our time to look around the area and I was once again impressed of the calmness induced by the chanting of Buddhist monks.

Little monk idols at the temple.

On we walked and soon came upon the waterfall, which, unfortunately, was hardly visible: The current time of year is quite dry in Korea, so the usually large waterfall had ceased to a mere dribble. But that’s just another reason for me to return again in August or September. We also made a quick detour to a little cave located closely to the waterfall. But what was far more interesting than the cave itself, was the way leading us there: It was short, but carved directly into an almost vertical wall. Although we were secured by fences on the edge at all times, I did feel reminded of the via ferratas I had climbed in Italy. At one point, we even had to pull ourselves up on a little cliff with the help of a rope conveniently tied to the fence there.

The (adventurous) path to the cave.

After another short rest after we had gotten back from the cave, with some local ladies inviting us to a snack of cucumbers and Korean miso, we hiked further up. The start of our way up was still quite comfortable, mostly consisting of wooden stairs laid out with rubber (from cut up car tires I think). But once we had managed to climb up all the stairs and had reached a little viewpoint, the real hike began: Now the paths were much steeper and quite rocky. Only a few hundred meters before the summit, we came upon a huge concrete expanse, which turned out to be a helicopter landing pad. A few groups of local hikers were already sitting there, so we, too, sat down for a rest here. One of the Korean colleagues was very well prepared for the hike and had brought a backpack filled with snacks: Gimbap (a kind of Korean sushi), cheese, dried fish, canned tuna and beer. We enjoyed a great lunch together and took some time to rest on the warm concrete afterwards.

Well-fed and fully content, the last few meters to reach the summit were easy work. Everybody wanted to take a picture at the rock marking the summit, so we waited some time until the crowds around it had cleared a little. I was stunned with the large amount of people hiking up the mountain with us, most of them faster than us, many even running up the steep paths. But on second thought, this is the city’s main recreational area and really easy to reach for all the people living here.

The temple beneath the overhanging cliff.

On our way back, we took a different route. We passed another beautiful temple, built directly into an impressive, overhanging cliff. Here, I was even more mesmerized with the Buddhist chanting than at the previous temple. We passed the temple and soon came upon the next highlight: a large and very beautiful Bodhisattva relief carved into a stone wall.

We walked on and soon reached the final highlight of the day: an area which you could call a park of stone figures. A man, who had lost the grandson he was raisng all by himself, had built all these impressive stone pyramids and figures. We actually met this man there, so he told us his story – with one of our colleagues translating into English for us. The disabled boy had not been able to speak and had never left the house until he passed away when he was only ten years old. The grandfather took to building his first figures as a prayer for the grandson. He told us he had seen ghosts on the mountain while working here all alone and from this moment on decided to also include all the animals his grandson had never been able to see into the stone figures. He said he will go on building his figures here until he dies himself. We were all so touched by this story and the devotion of the man, it’s hard to put into words.

Beautiful stone figures – all built by one man.

After we had stayed around the area for some time, we continued our hike down to the valley. The paths of this route were extremely steep, so our descent was quite slow. As many members of the group were only here on a business trip, only few were equipped with the right shoes, so we had to be careful not to slip. But eventually, we reached the waterfall again and from there continued to the upper station of the cable car. Here, we had another quick snack at one of the restaurants: haemul pajeon (a kind of Korean seafood pancake), along with some lightly alcoholic drinks made of pumpkins and rice.

Our last snack while on the mountain: haemul pajeon.

After some more walking, we reached the parking lot in the valley again. We were all exhausted, but the hike was great. As I will be staying here for three months, I’m sure I will do this hike again, possibly with some variations regarding the route. But I’m looking forward to the next hike already! I will also look into other options for hikes in the area. I have never been to Korea before, so I have a whole new country to explore in the following months.